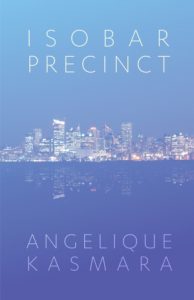 Lestari Cassidy and her two friends have witnessed a murder. Or have they? The video they captured on a cell phone agrees with what they reported to the police—a man’s throat is slit; blood sprays out, soaking the shrubbery—but the police find no trace of blood or any other evidence of a crime at the location in the inner-city cemetery where the event, whatever it was, occurred.

Other strange things are happening around Lestari. People appear and disappear, and some seem to be in the throes of reactions to bad drugs, spewing purple vomit. Her tattoo parlour is subject to targeted, repeated break-ins, as if someone has a vendetta against her and her partner. She finds a picture of herself from high school, sporting a tattoo that she didn’t acquire until years later. And then she has a chance encounter with her father, who had disappeared from her life when she was fifteen. She learns that he believed that terrible things would happen if he ever saw her again. And he was right.

Her father, a former golden surfer boy, has struggled for decades with mental illness, not helped by his participation in a clinical trial of a psychoactive drug expected to help depression. The drug trial went off the rails when all but one of the original participants died. That would have been the end of it if the sole surviver, Lestari’s father, hadn’t demonstrated some very unexpected side effects. Since then, the covert trials have continued, using society’s most vulnerable—vagrants, runaways, the mentally ill—as its test subjects.

Isobar Precinct, a speculative fiction novel by New Zealand author Angelique Kasmara, gets off to an excellent start with a high-stakes opening chapter, and moves briskly along through a convoluted plot that takes the reader on a whirlwind ride through some of the grittier parts of downtown Auckland. I was engrossed.

Lestari is a great character: warm, caring, active, with a distinct voice, and an unusual profession. (Unusual to me, anyway. I don’t recall ever before reading a book with a tattoo artist as the main character.) Her instincts are to help; when trouble happens she runs towards it rather than away. She picks up waifs and strays: a homeless Samoan boy, an old vagrant, even the young man she catches breaking into her work premises tugs at her sense of responsibility.

Other characters are equally well-drawn. Her alcoholic immigrant mother earns more sympathy than censure. (A lawyer in her native Indonesia, she had to take minimum wage grunt work in New Zealand to support her daughter and deteriorating husband. That might drive me to drink, too.) Even minor characters appearing only briefly—an old woman getting her first tattoo, a prostitute at the Sex Worker’s Collective, etc.—feel like real people. (The only one that felt like a cliché was the monomaniacal evil scientist running the drug trials.)

And like real people, they are all wracked by regrets and the wish to go back and have a second chance at a few things. In Lestari’s case, she desperately wants to replay a missed chance to connect with her father on the day he disappeared. With the lines blurring between her reality, alternate realities, and drug-induced distortions, it’s that desire to do things over that leads her into trouble. Like the rebellious ouroboros tattoo on her right calf, her life doubles back on itself as the plot becomes increasingly tangled.

This is a striking and beautifully written book, and quite impressive for a debut novel. The fundamental humanity of the people involved leavens the grim grittiness of their daily lives, and the ending is optimistic. Hopepunk, not grimdark.