Posted on 5 February 2021 by Barbara Howe 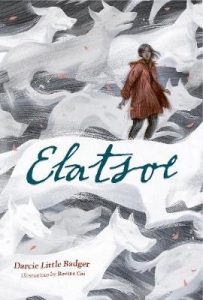 As Ellie Bride’s cousin Trevor lies in hospital, dying of injuries from an automobile crash, he appears to her in a dream, saying he has been murdered and begging her to protect his family: wife Lenore and baby Gregory. The police rule his death accidental, so clearly it is up to Ellie (Elatsoe) to investigate. Trevor named his murderer; the mystery is in why and how. And equally important, what can a 17-year-old Lipan Apache girl to do prevent a wealthy, White, politically-connected doctor from killing again?

Elatsoe, Dr* Darcie Little Badger’s debut novel, is a middle grade-to-Young Adult fantasy that draws heavily on the author’s Lipan Apache mythology and culture. One of the things I really like about this book is the interjected stories about Ellie’s heroic 6th-great grandmother, also named Elatsoe, who fought monsters and raised an army of ghost dogs from the dead. Ellie has inherited the secret of raising ghost animals, and has her own ghost dog, Kirby, who was her pet English springer spaniel before he died of old age.

The world Ellie inhabits is close to our own, with pistachio ice cream, movies, minivans, and goth neighbours’ plastic skull Halloween decorations. Important clues are exchanged in text messages, but there are also paranormal elements out in the open. The incident that starts the action is the collision of a car with a tree, but the book is full of metaphorical collisions: Native Americans with colonisers; Apache ghosts with European magic, including vampires and fairy rings; familial love with a thirst for vengeance, and both with a White, privileged mindset that instills a casual disregard for the lives of the less favoured.

Besides the stories about the 6th-great grandmother, there were a few other things I particularly liked:

Unfortunately, Elatsoe doesn’t seem to be quite sure where it stands. It’s advertised as Young Adult, but it seems written for a more juvenile, middle-grade audience. The investigation has a certain Scooby Doo flavour, and the dialogue between Ellie and her best friend feels too young for 17-year-olds. (And for having been best friends for years, they have some shocking gaps in what they know about each other.)

Those are, I hope, first-timer problems that will be ironed out with more experience. I picked up Elatsoe because I had read and liked several short stories by Darcie Little Badger. These three, in particular, I highly recommend:

You can read these and several others online for free. Check out her bibliography here. I’m looking forward to seeing more from her, particularly stories geared towards an older audience.

* Darcie Little Badger is an earth scientist, with a PhD in Oceanography