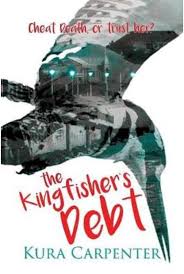 “Aunty Tamsin, was Billy my dad?”

I stopped applying my lipstick and and angled the rear-view mirror. … With grey eyes and auburn hair framing her face, Gwyn looked like her mother. She hadn’t inherited the blonde hair and blue eyes I shared in common with my older brother Billy, her dad.

From the opening paragraphs of The Kingfisher’s Debt, New Zealand author Kura Carpenter’s debut novel, I was hooked. Who was this Tamsin and why was she lying to her niece? The answer to that question is a long time coming, and lots of other questions are raised along the way.

The main plot driver of this urban fantasy, set in the city of Dunedin on New Zealand’s South Island, is a mystery involving forbidden bloodmagic. The police call in Tamsin Fairchild, translator and presumed psychic, to help when a dead baby is found with a knife through a pentagram drawn on its chest. Another baby is missing. Kidnapped.

Tamsin is not a psychic. She’s not human, either. She is, however, in debt to the Chief of Police R. Wiremu Jackson, and can’t refuse when he pairs her with new cop Scott Gale and sends them off to research the ritual sacrifice angle. It soon becomes clear that someone from the shadowy world of Fair Folk, elementals, and witches that Tamsin inhabits is involved, and she has to find out who is responsible for the kidnapping, before she and Gale are framed for the crime.

For about three quarters of the book, this present-day storyline taking place around the Winter Solstice alternates chapters with a summer romance twelve years earlier, providing much-needed backstory. The secondary thread draws the reader into the extended family of Tamsin’s clan, and its Capulet vs. Montague world of Fair Folk vs. Elementals, and cops vs. criminals. Both threads are engaging, and at the end, with the focus back solely on the mystery, I didn’t want to put the book down.

The things you get from this novel include an intriguing mystery and a sweet romance, fine writing, great characterisations, some terrific dialog, and snark. Lots of snark.

And there are some things you don’t get:

I had to read this through twice for it to really make sense. The first time through, I skimmed, and that was a mistake. Important details are embedded in what look like throwaway lines. (Embedded in the prologue, too. Don’t skip it.) After the first reading I was a bit frustrated with all my unanswered questions, but my second, closer reading answered some (not all), and convinced me this is a terrific story despite the loose ends.

The things I like include the acknowledgement that family ties are sometimes lifelines, sometimes shackles. Also the richness of the imagined world and the feeling of depth in Tamsin’s history. Some events that must have been traumatic—life with her grandmother, her boyfriend’s sister’s death, among others—were just touched on in a couple of sentences.

There’s enough meat there for many more stories in this world. I will be looking forward to them.

Trigger warning: a brief mention of non-sexual child abuse, and some swearing.