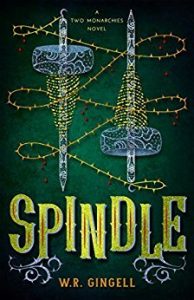 Although I love fairy tales, Sleeping Beauty, with its passive princess, is not usually one of my favourites. But in Spindle, Polyhymnia is no princess, Luck, the man who kisses her awake, is no prince, and being dragged kicking awake is just the beginning of the outraged Poly’s adventure.

Who put Poly into an enchanted, 300-year sleep? Why does Luck keep talking about her magic when she knows she has none? Why is someone trying to kill her? And why can’t she remember the wooden spindle that keeps finding its way into her pocket?

Don’t look for the familiar overlooked-and-insulted-fae trope here. Once they leave the crumbling palace and its thorny hedge behind, the story bears more resemblance to Howl’s Moving Castle than it does to Sleeping Beauty. Like Sophie, Poly is stubborn, independent, and clueless about her charisma. Like Howl, Luck is smug, maddeningly uncommunicative, self-interested, and just barely often enough charming and heroic. They bicker and spar and get under each other’s skin as they trek across the realm of New Civet in their quest to free Poly from the curse that keeps trying to put her back to sleep.

The author, W. R. Gingell, doesn’t quite play by the normal rules. She takes chances. She expects the reader to deal with ambiguity and uncertainty as she piles on one unexplained plot point after another. The story comes to a satisfying conclusion, but some important plot threads are simply left dangling. (Onepiece is adorable, but who or what is he, really? What became of Poly’s parents?) Other minor mysteries are introduced, dropped, and never mentioned again. (Why was Poly, lady-in-waiting, in the princess’ dress, not to mention the princess’ bed?) Gingell obviously never heard of Checkov’s gun—the advice that anything not essential to a story should be trimmed: If you say in the first chapter that there is a rifle hanging on the wall, in the second or third chapter it absolutely must go off. If it’s not going to be fired, it shouldn’t be hanging there.

Besides the random, dropped plot points, there were a few other irritations:

Among the things I liked are the dialog, and the fantasy world that isn’t populated with nasty people out to rob, assault, humiliate, or otherwise harm a teenage girl. Yes, there is one clear villain and a gaggle of power-hungry government officials, but most of the people Poly meets are fairly ordinary, decent people. Neighbourly, one might say, especially in Luck’s village. A story needs conflict, and this one has it, but I can’t take grim dark dystopias; I’d rather read noble bright fantasies, thank you.

If, like my husband, you want everything tidied up at the end or you can’t tolerate a fair amount of confusion at the beginning, this story is probably not for you, but despite it’s flaws I enjoyed it enough that I expect to read more of this author’s work.

Audience: pre-teens through adult. No sex or bad language, and very minimal violence.