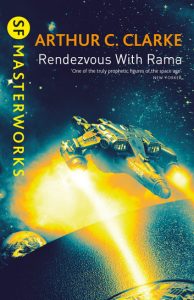 The year is 2131. Aboard the Solar Survey ship Endeavour, Commander Bill Norton and a team of scientists are on a mission to intercept and glean what information they can from an alien spacecraft as it hurtles through our solar system. The alien ship, dubbed Rama after the Hindu god, is a gargantuan hollow cylinder. The Endeavour lands on one end and the crew enter Rama through a series of airlocks to explore the interior of what appears to be a dead world. It’s a shame the ship is derelict, but not surprising; projecting its trajectory backwards to find the nearest star it could have launched from suggests it has been in flight for at least two hundred thousand years, perhaps longer.

The explorers are competent professionals, dealing with one problem after another as they penetrate further into Rama’s secrets. They are awed but not terrified of it, and take care not to inflict unnecessary damage.

But as they draw closer to the sun, Rama comes to life…

Rendezvous with Rama by Arthur C. Clarke is a hard science fiction classic. (Hard meaning grounded in physics, chemistry, and the other natural sciences. Don’t be put off by that; the language is accessible to the average person. I first read this in high school, and later to my daughter when she was ten. We frequently went off on tangents explaining things, but she understood it well enough to enjoy the story.) Published in 1973, this First Contact novel has been a strong influence on many others written since.

This novel is all about world building, although not in the sense of that term as it is so often used to justify interminable descriptions and boring backstory. Clarke’s prose is lean—my copy is only 274 pages—but he gives us enough sensory details to capture the explorers’ experiences and enough explanations from physics and the other sciences to underpin the validity of his imagined world. Characterisations are weak, and there’s hardly any plot to speak of. The journey of exploration is the destination here.

Wonder and optimism are essential components of this story. Wonder at the technological prowess and long-term thinking of Rama’s builders. Optimism that we humans, given enough time and resources and the will to overcome our divisions, could do something equally grand. The story ends with unanswered questions—Who built Rama? Where did it come from? Where is it going?—but that’s fine. This is a book to feed the imagination, and to stretch our sense of scale. Not to make us feel wretched for our insignificance; rather to broaden our horizons and nudge us out of our egocentrism.

Audience: Everybody. A few hints at off-screen sex, but no violence or bad language.

Rendezvous with Rama was intended to be a stand-alone novel, and is fine to be read that way. About fifteen years later, another author wrote several sequels, with some input from Clarke, but the sequels are dismal and disappointing. They are more about human shortcomings than aspirations, and take the story in a direction that is, to my mind, in conflict with the original. Mouse over for spoiler. Don’t bother with them.