Posted on 3 February 2018 by Barbara Howe 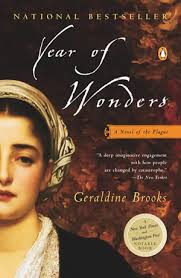 The year is 1665. Bubonic plague is sweeping through London. Further to the north, in Derbyshire, the plague comes to the mining village of Eyam through a delivery of flea-infested cloth. The journeyman tailor sewing the cloth sickens and dies, but the villagers ignore his pleas that they burn the clothes he made for them, and the disease spreads.

This much is historical fact. So are the events that follow, making this such an unusual story. The current Church of England rector and the former Puritan minister together persuade the villagers to quarantine themselves, allowing no one to enter or leave the village until the disease has run its course, to prevent the plague from spreading further and potentially killing many more. The quarantine does, however, mean that many who might otherwise flee and survive, instead stay and die. Before the quarantine is lifted, more than a year after the first death, at least 260 people die, out of a population somewhere between 350 and 800 (the records don’t all agree).

These are the bare dry bones of history. In the novel Year of Wonders by Geraldine Brooks, that story meets literature and becomes art. Those bones take on flesh and blood, and become living people. This is a beautifully written, moving account narrated by a young widow, Anna Frith, who works as a servant for the rector and his wife. It is a tale of grief and loss, anger and horror, fortitude and endurance. It is about loss—of friends, family, and faith—and about self-discovery and finding new reasons to live when the worst that could happen has come and gone. It is a bit slow-moving, but there’s plenty of drama along the way: love, lust, jealousy, murder, madness, opium-infused dreams, a witch hunt, and a harrowing descent into a lead mine.

The story starts near the end, after the quarantine has been lifted, with the heroic rector non-functional, having lost his religion along with his wife. It then steps back a year earlier, before the plague arrived, travels forward linearly, and comes back to the narrative starting point about thirty page from the end.

For the majority of the book—up until the last fifty pages—it was a lovely story, telling the tale of ordinary people under extreme pressure, with both villains and heroes, selfishness and generosity. The main complaint I had—a minor one I was more than willing to forgive—was that the narrator’s voice was too sophisticated, and with far too large a vocabulary and too modern a mindset, for the woman she was supposed to be: an 18-year-old miner’s widow who had never been far from her village, and who had only lately learned to read.

And then, unfortunately, in the last 50 pages (out of 308), the story went off the rails. Perhaps the author couldn’t figure out how to build to a climax rather than having the story just end or peter out, but the result is not a satisfying conclusion. Drama turns into melodrama, characters behave out of character, and the story morphs into some sort of action-adventure/bad romance mashup. The epilogue, in particular, came out of nowhere and was completely unbelievable. I’m taking a star off my Goodreads rating for that alone.

Some other reviewers felt that the ending ruined the whole book. I didn’t. I feel the rest of the book has enough merit before to make up for the disappointing ending. Just be forewarned.

Audience: Adult. Some violence, non-graphic sex, graphic descriptions of the effects of the disease.

1 Response to Year of Wonders