We made a short trip down to the South Island last weekend, and started off with a question: how do we get from Christchurch to Picton, with Highway 1 still out of commission after last year’s earthquake? The standard answer is to swing out to the west via Lewis Pass, drive up Route 65, and head back east via Route 63 along the Upper Buller River. Our answer was to go a little further west, through Reefton, almost on the west coast. It was a bit off the beaten path, but it’s a nice drive up the Buller Gorge, and we had the road to ourselves on Sunday morning, until we rejoined the main flow of traffic near Murchison.

This is where we stayed Saturday night, in part of the Alfresco Historic Villas B&B: 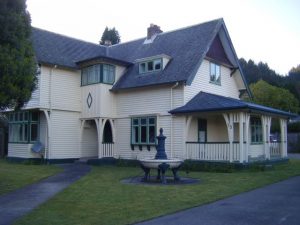 It’s not a great picture—it was early morning, and the sun hadn’t yet peaked over the tops of the mountains—but this house had character, with stained glass panel in some of the windows, polished wood railings on the staircase, and fireplaces in the bedrooms. There was more fodder for the imagination here than in the typical anonymous motel room, and I find myself wondering about the people who built the house. Who were they? What were they like? And what would they have thought of the guests passing through their house a hundred years later?

They were clearly well off; did they make their money in the Reefton gold rush in the 1870’s? The house is across the street from a small building labeled “School of Mines”; was the first owner a miner, or a merchant supplying the miners, or something else? Were they natives or immigrants? Odds are, at that time, they were immigrants from the UK. Did New Zealand live up to their expectations? Were they happy here?

What stories would they have told about Reefton’s early years? If a writer makes up stories about them, will the stories be wildly off the mark exaggerations of ordinary, mundane lives, or would they pale in comparison to the stories the inhabitants could tell of adventures at sea or upheavals in this rugged wilderness?

I’ll probably never know. For every historical character whose life is recorded, there are millions of others whose stories are lost, or not widely disseminated. That doesn’t mean the stories aren’t worth telling.