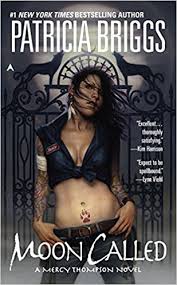 In the urban fantasy Moon Called by Patricia Briggs, our world is awash in the preternatural: werewolves, vampires, the greater and lesser fae, and other assorted oddities. The fae have recently been forced out of hiding; concerned over the pace of scientific discoveries, in a carefully controlled PR move the darker powers have outed some of the more charming and innocuous fae. Despite their non-threatening nature, the humans view them with considerable suspicion, and have forced them into guarded reservations.

Werewolves have not yet been exposed, although in this world they are not inherently evil. All once human, they retain their human capacities for both good and evil, and, for the most part, don’t want to be at war with human society. A newly turned werewolf on his own will attack humans, but the alphas have learned through hard experience to control themselves, and through the pack structure force their members to behave.

Among the others still in hiding is one Mercedes (Mercy) Thompson, auto mechanic, and owner of a garage in Kennewick, Washington state, USA. Part Native American, she can shape-shift at will into a coyote. Raised by a werewolf pack, she has a troubled history with them, and now has an arms-length relationship with her next-door neighbour, the alpha of the Columbia Basin Pack.

That relationship comes under pressure when a newly-turned teenage werewolf walks into her garage, looking for work. Mercy’s maternal instincts kick in, and in trying to watch out for him, she kills another werewolf, and lands smack in the middle of a werewolf power struggle. Pretty soon she has another dead werewolf and a seriously injured one on her hands and an abducted human girl to rescue, and is forced to ask for help from the pack she ran away from years earlier.

As female protagonists go, Mercy Thompson is a winner. She is a responsible adult, and she doesn’t give up, ever. Smart, strong, caring, loyal, and proactive, she has more guts than are good for her. In the second book in the series, Blood Bound, when she is challenged to sing before an audience of hostile fae, she belts out O Holy Night. So maybe not always so smart. She walks a fine line between being forceful enough to keep the werewolves from pushing her around, and being so forceful she pisses them off.

I have read the first three books in the series, and there are at least ten. While each one is a satisfying read in itself, with a neat conclusion, they are part of a longer plot arc ratcheting up Mercy’s involvement with the werewolves, fae, and vampires. Each one picks up directly after the previous books ends, with a large cast of recurring characters. Read them in order.

The supporting characters are well-developed, the pacing and plotting are good, and Mercy’s snarky attitude entertaining, but they aren’t what I would call an easy read. Briggs doesn’t pull any punches on the emotional cost of Mercy’s actions. I got so caught up in the story that the end of the third book, Iron Kissed, was quite wrenching. That won’t stop me from reading more.

Audience: Adult. Violence, a fair amount of it, and a bit gory. No sex in the first two books, sexual assault in the third book. Buyer beware.