The Empress of Salt and Fortune

Posted on 8 October 2021 by Barbara Howe 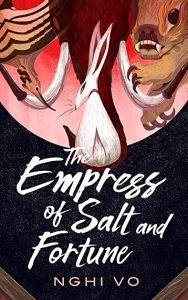 An empire subdues a new acquisition. The conquered people must send their ruler’s daughter to the empire to cement their new “alliance.” When the girl arrives in the capital, she is condescended to by the courtiers who consider her an outlandish barbarian. She is given the title “Empress,” but she has no friends, no power. After she delivers a son, her usefulness is over except as a hostage. Her baby is taken from her and she is sent into internal exile, destined to live out her life alone in a padded and gilded cage, far from the centres of power.

Or so the emperor and his sorcerers think.

Empress In-yo’s story starts in a familiar place, but it doesn’t follow the more familiar trajectories. She is quiet, but not passive; alone, but not friendless; angry, but not rash. And when her moment comes, she catches the rulers of the empire of Anh by surprise, for how much trouble, after all, can a few women make?

The Empress of Salt and Fortune by Nghi Vo, one of this year’s Hugo contenders for best novella, gets off to a slow and somewhat confusing start, with the entire first chapter (out of twelve, or about 15% of the total) establishing a framing device. The non-binary cleric, Chih, and their travelling companion, a talking bird (a hoopoe) named Almost Brilliant, come to the house where the empress lived in exile, and meet an old woman named Rabbit. Chih explores the house, cataloging the objects they find, and recording the stories Rabbit tells about them.

A dress triggers Rabbit’s memory of In-yo’s arrival at a court modeled on the imperial Chinese. A child of the north, she brings a fine dowry of salt, pearls, and whale oil, and wears the magnificent, one-of-a-kind sealskin dress, made from the pelt of the seal her brother—now dead in the war—had stalked across the ice on his first hunt.

Most of the book is a series of flashbacks, reminiscences. They seem at first to be rather random, disconnected, with no obvious connection to the event in the first chapter that piqued Chih’s interest. But a little patience pays off. The vignettes gradually fill in pieces of a puzzle, and near the end come together to create, in retrospect, a cohesive story arc. (The format is probably not for everyone, but I found it intriguing. I know how stumbling across a forgotten object can trigger a flood of memories.) In-yo herself is not the point-of-view character; her story is told through the eyes of Rabbit, servant first and later friend, confidante, and co-conspirator.

The story is rich and atmospheric, with stronger world-building and characterisation in less than 130 pages than I’ve seen in some much longer books. The emotions are subtle and understated, and the violence mostly happens off-screen, implied rather than articulated. It benefits from a close reading; a fast skim will miss many of the telling details.

The Empress of Salt and Fortune is the first in a series (The Singing Hills Cycle) following the cleric, Chih. I’m looking forward to reading the next, When the Tiger Came Down the Mountain.