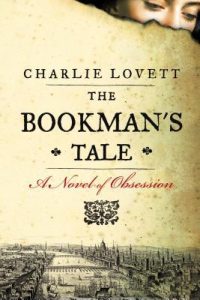 When grieving widower Peter Byerly pulls an old book off a shelf in a secondhand bookstore, he discovers a loose sheet of paper, four inches square, tucked into its pages. He turns the paper over, and nearly collapses in the dusty corner of the bookstore. On the other side is a watercolour portrait of his late wife, Amanda. Only it couldn’t possibly be Amanda; the painting is at least one hundred years old.

Peter is an established antiquarian bookseller. Old books, and a few other people who share his passion for them, are his only friends. An American by birth, he is now living in Kingham, a village (a real one) in Oxfordshire, closer to the centres of activity for his trade. (Like the also-real town of Hay-of-Wye on the Welsh border, with its population of two thousand people and twenty-plus bookstores; sounds to me like a fabulous place.) Determined to find out who painted the portrait and why it looks like Amanda, he goes to a meeting of the Historical Watercolour Society in London, and rather haphazardly finds himself in a conversation with the one person, a woman named Liz Sutcliffe, who is most likely to be able to help him.

Peter’s arrival in Kingham has set other things in motion. A local, whose family had once been well off but was now in financial straits, contacts him, asking for help in selling his family’s collections of old books and papers. Among them is a book that may hold the answer to English literature’s biggest question: who wrote Shakespeare’s plays? Or, the book may just be a very well-executed forgery. Peter sets out to determine which it is. Inevitably the two lines of inquiry intersect, and he and Liz are caught up in a centuries-old and still ongoing saga involving forgery, fraud, theft, blackmail, and in the present day, gunfire, deception, and murder. If they are lucky, they’ll only be framed for murder. If they’re not lucky, they’ll be the next victims.

Charlie Lovett’s plot-driven novel, The Bookman’s Tale: A Novel of Obsession, veers back and forth between past and present, weaving together several narrative strands: the history of a lost copy of the book on which Shakespeare based his play, A Winter’s Tale; a 19th century forger and what drove him to take up his questionable trade; Peter and Amanda’s college romance; and Peter’s present day untangling of the intertwined mysteries. (Well, present day, sort of. The novel was published in 2013. Peter’s present is set in 1995.)

Unfortunately, the novel can’t quite make up its mind what genre it wants to belong to. It starts off seeming to be a fairly high-minded story combining an academic mystery with a psychological study of a man with a serious mental health issue who is not dealing well with the loss of his wife. But by halfway in, it shifts gears to become a thriller. It is reasonably successful as a mystery/thriller—more so than some other books I’ve read recently that were obviously intended to be in that space—despite involving a few too many coincidences, and one plot thread that was glaringly obvious. The sappy romance was not as successful. Amanda never felt real; she was a man’s view of a perfect wife: beautiful, supportive, always sexually willing, and wealthy to boot. (The foul-mouthed Liz was better.) And Amanda’s upper-crust family’s easy acceptance of a boy with a trailer-trash upbringing was unlikely, if not absurd.

Aside from these problems, the story was fun, and interesting enough to make me put aside the other three books I’m currently in the middle of to focus on this one.

The one aspect that I most liked was the glimpses into the antiquarian book trade, and the life of a serious book collector/bibliophile. Lovett is a former antiquarian bookseller himself, so presumably he knows what he’s talking about when he throws tidbits about forgery techniques, bookbinding, conservation, and questions of provenance into the story line.

(Confession: I collect books, but I’m not “serious” about it; my shelves are filled mostly with beaten-up genre fiction gathered by the bagful at used book sales. First editions? Pffft! In my world books are like cars, dropping in monetary value the instant they leave the lot/store.)

As for the question of who did write Shakespeare’s plays, this novel doesn’t excite any controversy, coming down as it does on the side of majority opinion. I have no stake in that debate; either way would have been fine with me for the sake of the story.

This entry was posted in Historical Fiction, Mysteries. Bookmark the permalink.