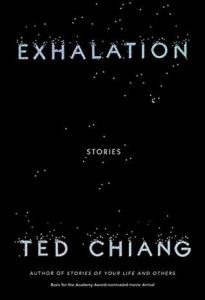 Exhalation: Stories is a collection of award-winning stories (at least five Hugos and several Nebulas between them) by American speculative fiction writer Ted Chiang. These moderately-paced stories are entertaining, but they are also examinations of ideas, touching on such serious topics as religion, meta-cognition (thinking about thinking), and AI. These are stories to take your time over, because they make you think, and in the way of the best kind of science fiction: about what it means to be human.

These stories have already been reviewed by many people; I doubt I have anything to add to the conversation, except to say that I liked them. In order by how much they appealed to me (a totally subjective measure), here are the stories. (Warning, a few mild spoilers ahead):

There were three other rather less-successful stories in the collection, including the longest, The Lifecycle of Software Objects. It drags, unfortunately. It isn’t very successful as a story, even though it is worth skimming as an exploration of an ethical quandary we may face in the not too distant future: if we do succeed in creating self-aware AIs, what responsibilities will we have towards them in terms of their ongoing support and education? Chiang argues that if we expect AIs to eventually become as capable (at least) as adult humans, their consciousnesses will need to be grown organically, and tended and educated just like human children; we won’t get there quickly or by simple machine learning.

This entry was posted in Science Fiction, Uncategorized. Bookmark the permalink.