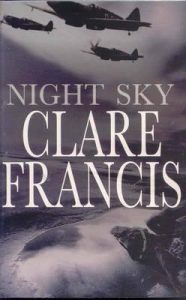 On a dark night in Brittany in March 1943, Julie Lescaux, and her 7-year-old son Peter shelter from the wind and rain in a cleft in the cliffs at the water’s edge. They watch in horror as German occupiers converge on the men below them, shooting or capturing everyone trapped on the narrow rocky beach. The prisoners and dead included their friends and relatives in the French Resistance, Allied servicemen they were trying to help, and the crew of the British naval vessel that had come to spirit them away to safety across the English Channel.

Along with Julie and Peter is a man the Germans are frantic to recapture: David Freymann, a Jewish scientist and expert in short-wave radar. The trio evade the German soldiers, and begin a desperate voyage across the Channel in a small sailboat with the Germans in pursuit. None of them have ever sailed before. David is too ill and Peter too small to be of much help; all three lives are in Julie’s hands.

Julie and David are two of the three point-of-view characters in the World War II historical novel Night Sky by Clare Francis. Julie, the foremost of the three, is English, with a French father. In 1935 she is unmarried and pregnant at the age of 19. At odds with her rigid and controlling mother, she flees to her father’s relatives in Brittany. She seems at first soft and uncertain of herself, but as her world grows more dangerous, she develops a steel spine to protect herself and her son.

The third character, Paul Vasson, is the villain: the collaborator who infiltrates and betrays the French Resistance in exchange for German gold. Vasson is a nasty piece of work and, rather unfortunately, is the first character we are introduced to. He was so repulsive I almost tossed the book out after the first chapter, but I’m glad I didn’t. Julie and David were both much more appealing.

This is a relatively old thriller (published in 1983) with a simple plot: Will they escape? Will the traitor be brought to justice? It starts off slow, introducing us to the characters and their problems before the start of the war. The pace picks up as the war begins, becomes nail-biting with the scene on the beach, and stays intense until the end.

The description of the race across the Channel is impressive for its immediacy and the heart-breaking quality of Julie’s battle with the sea in a small boat. That voyage is not the second-hand distillation of an armchair traveller listening to sailor’s tales. This author has been there, done that. That was obvious, even before I learned that she had twice sailed solo across the Atlantic, and was the first woman to captain a yacht on the Whitbread Around the World Race.

The race across the Channel is fictional, but many of the events this solidly-researched book is based on are real, including the importance of the development of radar to both sides and the history of the French Resistance. Vasson, in particular, seems exaggerated—How could anyone be that foul and still get people to trust him?—but he is based on a real person, Jacques Desoubrie, who penetrated at least two escape lines and was responsible for over a hundred British and American evaders being captured and sent to Buchenwald.

In opposition to such traitors, this novel celebrates the quiet heroism of ordinary citizens, and brings alive rural life in Brittany under the Germans. It’s a terrific story, well worth getting past the tedium of the first few chapters.