Posted on 7 November 2020 by Barbara Howe 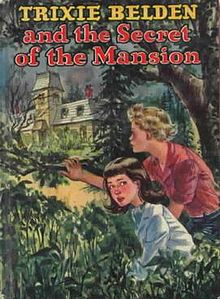 With all of my psychic energy tied up in the U.S. election for the past few weeks, I just haven’t had the time or attention for anything new or challenging. I’m going on a nostalgia trip today; hope you don’t mind…

Trixie (Beatrice) Belden is a teen with insatiable curiosity, a vivid imagination, and and a strong sense of fair play. Add in an extroverted personality and a talent for finding trouble wherever she goes, and you have the star of an engaging series of mystery novels.

I read the Trixie Belden books decades ago, when I was a preteen, and loved them. If I had to name the sources of my ongoing love for mysteries, these books would be at the top of the list. I thought then, and still do, that they were better than the more well-known mysteries starring her literary cousin, Nancy Drew.

Trixie is a much more believable character than Nancy. Except for solving mysteries, she’s a pretty normal adolescent, meaning she’s sometimes bright, kind, and in other ways appealing, and sometimes dumb, grumpy, or annoying. She lives with her middle-class parents and brothers in the small town of Sleepyside-on-Hudson, New York (fictional, but based on the real town of Ossining, NY). The stories include a wealth of detail that ground them in that specific place and draws the reader into the hilly terrain of a small town overlooking the Hudson River. The Beldens keep Trixie on a loose rein that gives her plenty of time to search for clues, but she gets into trouble if she neglects her chores, including weeding the vegetable garden and minding her lively six-year-old brother.

In the first book, The Secret of the Mansion by Julie Campbell, Trixie is thirteen and bored over summer vacation with her brothers away at camp. Her interest picks up when a new girl moves in next door. The two of them investigate odd happenings at the old and supposedly empty mansion up the hill from Crabapple Farm, the Belden’s home. What they uncover outrages Trixie’s sense of justice. Trixie solves the mystery, but the book ends on a cliffhanger, leading directly into my favourite in the series, The Red Trailer Mystery. (Don’t worry, that’s the only book-spanning cliffhanger, IIRC.)

The first six books by Julie Campbell, written between 1948 and 1958, are the best. They take us through six months of Trixie’s life; she turns fourteen, gains new friends, proves her worth as a detective, and undergoes significant character growth.

Then, unfortunately, Campbell didn’t want to continue the series. The publisher turned it over to a series of ghostwriters under the pseudonym Kathryn Kenny, and it was never quite the same after that. There were another thirty-three books in the series, written between 1961 and 1986, but Trixie and her friends stopped growing up. She was an eternal fourteen-year-old for the rest of time. Worse, in book seven, this jeans-wearing (in the 50s!) hard-core tomboy got significantly feminized, having to ask her brothers for help on things she would have done herself in earlier books, getting shoved into dresses more often, and having her solid friendship with the boy next door turned into a budding romance. Sigh.

The first time around, I didn’t even notice the change. It bothers me a lot more now. They aren’t all as annoying as book seven; several different writers worked on the later books, so they vary in quality, consistency, and adherence to Campbell’s original characters. Most of the individual books under the Kathryn Kenny name are still pleasant reads, if you like formulaic cosy mysteries, but they just don’t have the same vigour and ongoing character development the first six had.

Some readers will consider the books dated, but I prefer to call them ‘old-fashioned.’ Trixie and her friends live in a white-bread world of (mostly) intact families with stay-at-home moms, but they do address some serious issues, such as a teenage boy running away from an abusive stepfather. Given that they are still (or again) in print, and that the goodreads entry for The Secret of the Mansion includes dozens of ratings from 2020, I’m obviously not the only one that finds them still appealing. In fact, I was nudged to do this blog post by a shout-out to both Trixie and Nancy in Seanan McGuire’s recent (2019) novella, In an Absent Dream.

Audience: mystery-loving preteens and older adults looking for a dose of nostalgia.

This entry was posted in Children's Fiction, Mysteries. Bookmark the permalink.