The Prince of Secrets 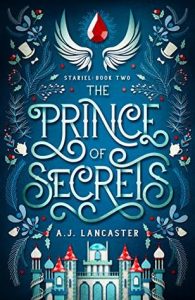 The Prince of Secrets, the second book in the Stariel series by New Zealand author A J Lancaster, takes us deeper into the world of the fae we were given only glimpses of in the first book, The Lord of Stariel. This review contains spoilers for the first book; if you don’t want them, bail now.

Where the first book focused on Hetta Valstar and her human family and neighbours, the second book splits the focus between Hetta and her family’s faithful butler, Wyn Tempest, now revealed to be a fae prince. With his cover blown, the two factions in a long and bitter struggle among the fae become very interested in his refuge in Stariel. On one side is the Court of Dusken Roses, whose Princess Sunnika he was pledged to marry at the command of the High King, in an attempt to end the war. On the other side is the Court of Ten Thousand Spires, whose King Aeros, Wyn’s father, has no interest in ending the war. With his magic diminished by Wyn’s broken promise, he has no compunction about murdering his own son in pursuit of power. Why should he? He has nothing but contempt for his son’s indulgence in those mortal weaknesses: empathy, compassion, and kindness.

With Hetta established as Stariel’s new lord, the estate’s boundaries are secure. No member of either fae court can cross into Stariel unless invited in. Hetta and Wyn, now assuming the role of steward, are paying less attention to fae intrigues than to recovering from the previous steward’s embezzlement and restoring Stariel to a sound financial footing. Once they have worked out a solid plan, they approach their bank manager for a loan, a task that requires leaving Stariel to visit the bank offices.

That journey, of course, kicks the story into high gear. The action weaves in and out of Stariel, eventually taking us into the Court of Ten Thousand Spires. Wyn’s eldest sister tries to kill him, and his other siblings, if not quite fratricidal, will use him and Hetta against their father if they can. There are monsters, a kidnapping, two unwanted and antagonistic ambassadors, and a fae land that is very, very protective of its lord.

Most of the issues I had with The Prince of Secrets are minor quibbles. I was a little disappointed that the other Valstars, Jack in particular, didn’t have as much to do in this book, but the new fae characters, Princess Sunnika and Prince Rakken, Wyn’s brother, are interesting. I didn’t like Wyn as a viewpoint character as quite much as I liked Hetta, there was a bit too much of Hetta’s raging hormones trying to break down Wyn’s self-control, and the resolution was not tremendously satisfying. This had more of a feel of a transitional chapter in a longer story arc, setting the stage for further conflict with Wyn’s family, than as a good standalone novel.

I did have one serious complaint with it, though. The scene with the bank manager’s wife jerked me right out of my wilful suspension of disbelief. Mouse over for spoiler.

Despite these problems, I enjoyed the book. I like the world the author has created. After all, what could be wrong with a world that contains cute half-fae kittens? I’m looking forward to reading the third book in the series, The Court of Mortals.