Posted on 8 December 2019 by Barbara Howe 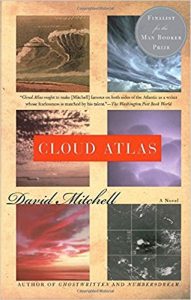 The most notable feature of David Mitchell’s award-winning—and challenging—novel Cloud Atlas is the book’s structure. Made up of six loosely-connected novellas, each in a radically different style and time period, this novel nests the six stories like Russian dolls. The book opens with the story set in the oldest time period, then forty pages later, that story is interrupted to start the next. We work from past to present then future with the uninterrupted sixth story in the middle, and then work our way back out in reverse order, picking up each interrupted story where it left off. (Thankfully only one story is interrupted in the middle of a sentence.)

The six stories by themselves range from not bad to excellent; together they complement each other and add up to something that feels a bit more than the sum of its parts. The critics who call this a masterpiece are right; I’m amazed by the stylistic virtuosity on display.

The overall theme, as I understand it, is the immutability of human nature, with the strong preying on the weak. That sounds like a downer—some of the individual stories are, with one suicide, one threatened execution, and several murders, attempted or succesful—but some of them have positive endings, some human connections are made and trust established, and the first/final story ends on a hopeful note, with the narrator pledging his life to a noble cause.

The connections between the stories are rather tenuous, but each story plays some role in the next: the journal in the first story is read by the second story’s letter writer, his letters are passed on to the journalist in the third, and so on. There are also hints of reincarnation, with a recurring birthmark (a device I found more silly than helpful).

The six stories are:

The first story (the journal) may be difficult for some readers to get through, given its rather languid 19th-century style. The rest have a more brisk pace, with the middle stories being fairly easy reads. The fifth story, in projecting a corporation-dominated future, plays with branding to give a sense of future-speak. Sonmi’s world is filled with disneys (videos), sonys (cell phones), and rolexes (clocks), etc., and some spellings are a bit different, too, but the language is still very accessible. The sixth story, however… This is the opening sentence:

Old Georgie’s path an’ mine crossed more times’n I’m comfy mem’ryin’, an’ after I’m died, no saying’ what that fangy devil won’t try an’ do to me.

This is still clearly English, but an English distorted to give a sense of a significant passage of time and social upheaval. It was, for me, a difficult read, and I started it feeling more irritated than engaged. I was surprised, then, that by the end, this story was the most moving, leaving me filled with an aching sense of loss.