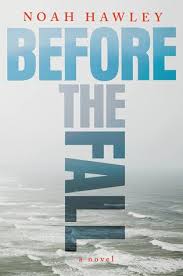 One summer evening a private jet takes off from Martha’s Vineyard, en route to New York City. There are ten people aboard: seven passengers and three crew. Among the passengers are the Bateman family: father David, mother Maggie, daughter Sarah, and son JJ.

The plane breaks apart on impact. Floating amid the burning wreckage are two survivors, the boy JJ, and an artist, Scott Burroughs, only on the plane because Maggie Bateman, an acquaintance he had encountered earlier in the day at the local farmer’s market, had offered him a ride when he mentioned he had business to attend to in the city.

With JJ clinging to his back, Scott—a champion long-distance swimmer in his youth—begins the swim for shore. Hours later, they crawl up onto the Montauk beach. A fisherman takes them to the hospital, and Scott’s second, and longer, ordeal begins.

After the opening sequence of the crash and the Scott’s epic swim, Noah Hawley’s Before the Fall weaves back and forth between past and present, as the authorities begin their investigation into what brought the plane down. Vignettes of the people involved and how they came to be on the airplane that night are interspersed with the progress of the investigation and the media frenzy, and its impacts on the lives of the artist and the little boy’s remaining relatives.

This book is billed as a thriller, but it isn’t really successful as one. The author throws in various red herrings in the lead up to the big reveal of who was responsible and why, but the actual revelation was a bit of a letdown. For me, the more interesting story centered on the artist, and his shock and confusion as his life is changed drastically and irrevocably. Before the crash he was a struggling artist, a womaniser and recovering alcoholic who had recently turned his life around and begun to paint with renewed vigour. After the crash he becomes a celebrity whose art is suddenly worth many thousands and a suspect in the ongoing investigation. He is also a victim of sustained character assassination by a vicious TV newscaster convinced he was carrying on an affair with Maggie Bateman and was somehow responsible for the crash. Anyone disgusted with the privacy-invading and twist-the-story-to-whatever-sells tactics of the news media will find Scott’s face-off with the newscaster gratifying.

The other aspect that gave the story emotional resonance was the relationship between the artist and the boy: the trust the boy shows in the man, and the adult’s ongoing sense of responsibility for the child.

It’s not a great book; the pacing has problems in some places and it is littered with minor inconsistencies and clunky metaphors. But it is entertaining, and the survivors’ story has heart. Read it as the story of someone’s life turned upside down by a catastrophe and the resulting news coverage, rather than as a thriller, and it will be more satisfying.