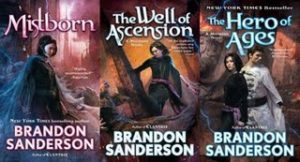 The Final Empire is a grim dark place, caught for a thousand years in the iron fist of the Lord Ruler, a god-like immortal with a squad of fanatical minions, the Steel Inquisitors, bent on rooting out heresy and enforcing his will. The technology is approximately late 19th century, with canned food and massive slums, although without rapid communication or transportation systems, but the society is strictly feudal. The peasants—the skaa—are regarded as subhuman by their noble masters, who can rape and kill them with impunity.

In fact, if any noble takes a skaa woman as a plaything, the law requires him to kill her before she can bear a child. Why? To prevent the noble’s magical powers—Allomancy—from leaking out into the skaa population and making them dangerous.

What the nobles and the Lord Ruler don’t know is that it’s too late. There are already skaa with allomantic powers, and one of them—Kelsier—is bent on revenge for his wife’s death.

Kelsier recruits a crew of thieves to organise and lead a skaa rebellion and overthrow the Lord Ruler. Can he succeed, when countless others have failed over the centuries? What price will he and his crew have to pay for his audacious plan?

And what will a successful rebellion mean for Vin, the teenage girl with powerful Allomantic abilities among Kelsier’s recuits? He and his crew teach her how to use her talents and how to act like a noblewoman, then dress her up and send her off the the nobles’ balls under an assumed identity to spy for them. At her very first ball, she draws the attention of a young nobleman, Elend Venture, the heir of one of the Empire’s most powerful houses, and before long she falls for him, rather hard.

That was not at all what Kelsier had in mind.

Vin is the primary viewpoint character in all three books of Brandon Sanderson’s Mistborn trilogy, and it’s largely her story as she grows from a fearful, solitary street waif to a self-confidant, respected, and heroic adult. The first book, The Final Empire, chronicles the skaa rebellion. The second book, The Well of Ascension, could have been subtitled The Education of Elend Venture, as he learns some hard lessons while trying to prevent societal collapse in the rebellion’s aftermath. The third book, The Hero of Ages, is driven by a serious mistake Vin makes at the end of the second book, a mistake that threatens to bring about the end of their world.

I need to say something here about the magic, which is strikingly original (or at least, unlike any I’ve encountered elsewhere). There are three main branches: Allomancy, Feruchemy, and Hemalurgy. (We only find out about Hemalurgy in the third book.) They are all powered by metals, either pure elements or alloys. Allomancers “burn” (metabolise, somehow) the metals to power changes in their perceptions (tin enhances senses, bronze allows discovery of other Allomancers, etc.) or abilities (iron and steel power pushing and pulling on metals from a distance, pewter provides greater strength and endurance), while Feruchemists use the same metals as stores for their own bodies’ capabilities (memory, strength, etc.).

I found this system intriguing, but in fairness I’m not sure it’s accurate to call it a “magic system.” It has supernatural origins, and it doesn’t follow the rules of science as we know them, but it does have clearly defined and apparently consistent rules of its own, so in this alternate reality maybe those rules are consistent with that universe’s science? Certainly the Steel Pushes and Iron Pulls obey the laws of physics, and there’s a fair amount of drama in Vin’s training regarding her having to be aware of relative masses and angles of attack, among other things. For example, if this small woman pushes on a large soldier’s metal breastplate, she’s going to throw herself backwards, not push him aside.

This makes for some cinematic descriptions of fight scenes, with Allomancers flying through the air, using mass and momentum to confound their less adept foes.

Besides the magic system, there are other things I liked about this trilogy:

In sum, I enjoyed this trilogy, as did my family, but it’s flawed and seems quite overhyped. (176,000 5-star ratings on goodreads.com. Seriously? Take those swooning reviews with a grain of salt. It’s fun, but certainly not the best fantasy I’ve ever read.) The first book in the trilogy is the best, with some tedium but building up to a great climax. The second was disappointing, and the third started off slow but picked up, and was better than the second. I’m glad I read the whole thing, mainly because I did want to find out what happens to Vin, but it hasn’t left me eager to pick up another doorstop any time soon.

Audience: adults, older teens. No sex or bad language but lots of violence, brutality, and gore.