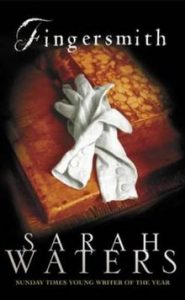 Fingersmith, Sarah Water’s neo-Victorian crime novel, is the lesbian daughter of Oliver Twist and The Woman in White, fostered by Jane Eyre. Got your attention? There is a romance, between two people who happen to be women, but ‘lesbian’ is a less significant nugget of information than ‘neo-Victorian crime’. If you like Charles Dickens, Wilkie Collins[1], or the Brontë sisters, there’s a good chance you’ll like Fingersmith.

Susan Trinder, the narrator of the opening section, is a young woman raised in a den of thieves. (A fingersmith is a pickpocket.) When a con man in their extended family, affectionately known as Gentleman, asks for Susan’s help with a plan to persuade an heiress to marry him, she agrees. In exchange for a promised share of the proceeds, she sets off for Briar, the heiress’s home, to serve as lady’s maid and go-between with Gentleman. That Gentleman intends to commit the heiress to an insane asylum as soon as he’s secured her money doesn’t bother Sue. Not, that is, until she finds herself falling in love with the heiress, Maud Lilly. Gentleman bullies Sue into carrying out his plan despite her growing misgivings, he and Maud elope, and the first section of the book closes with a bang on the novel’s first major plot twist. Other plot twists follow, leading up to a rather gory murder and it’s aftermath.

The story is broken into three parts, with Maud narrating the middle section before returning to Sue in the third. Maud is not the plump and innocent pigeon Sue initially took her for, but then, no one in this novel is quite what they appear. This is more a story more about camouflaged emotions, betrayal, and misplaced love than a whodunit. By the time Sue begins to unravel the why, the who had long since been given away.

Waters does a fine job of bringing some of the nastier aspects of Victorian society to life: the casual cruelties inflicted on children and servants, the ease with which a man could have an inconvenient woman incarcerated, the baby farms where infants were dosed with gin to keep them quiet… If the injustices inflicted on Jane Eyre raise your hackles, this book can send you into a rage. Maud’s uncle is a particularly nasty specimen. Life at Briar makes Sue’s thieves look like a normal, loving family in comparison.

I confess I would have liked Fingersmith better if it had been 450 pages or less rather than 550. The pacing is uneven; sometimes it moves right along, but there are other times, when Waters indulges in showing off her knowledge of Victorian England or focuses on atmosphere, that we lose sight of the plot. The section on the tortures in the madhouse, painful for both the victim and the reader, goes on for about 60 pages, most of it peripheral to the plot. And as for creating a bleak, claustrophobic atmosphere, Waters does a superb job, but I could only take so much of it at a time, especially when the narrative doubles back on itself to give us Maud’s point of view on events Sue already covered. Some of that was necessary for understanding the two main characters, but it did get a bit tedious.

In short, 3.5 stars instead of 4 or 5. It’s an impressive piece of story telling, but a bit too melodramatic and grim for me to rave about, and the plot, though entertaining, doesn’t hold up to hard scrutiny. Mouse over for spoiler. Am I glad I read it? Now that I’ve had a few weeks to recover, the answer is yes, but in reaction to it my next read was light and fluffy.

Audience: Mature, mainly for the pervasive psychological abuse. Some violence and bad language, and one rather mild sexual encounter.