The Lord of Dreams 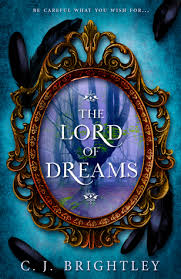 Be careful what you wish for, as you will surely get it.

Claire Delaney, normal American teenager, wishes she could be a hero. She is immediately snatched out of her bedroom by a delightfully dangerous figure, transported into the world of the fae, and sent on a mission to rescue an imprisoned fairy. In the next few chapters of The Lord of Dreams by C J Brightley, we follow the disoriented Claire as she wanders randomly through a kaleidoscopic and strangely barren dreamscape. Nothing makes much sense; the fae king who sends her into this world calls himself her villain and the other few characters she interacts with seem determined to insult her and avoid telling her anything useful. She does eventually find and rescue the fairy, without understanding who he is or why he was imprisoned.

I struggled with that bit, the first 20% or so of the book. I didn’t like not understanding what was going on, and it annoyed me that Claire never stopped to ask herself why she should obey the fae king’s order if he was the villain. She seemed passive, letting herself be pushed around and not thinking things through. I was about to toss the book on the Did Not Finish pile, when things changed. For a few chapters the story bounces back and forth between strange dreams and normal life. Claire grows up and is in grad school when the fae come to her again, asking for her help. They are at war, their king—the nightmare figure from her dreams—has been captured, and he had predicted that she would be the one to rescue him.

From then on, the story’s focus is more clear, and I devoured the rest of the book in one Sunday afternoon and evening. It’s a nice combination of heroic quest, self-discovery, and gentle romance set in the world of the Seelie and Unseelie from the folklore of the British Isles.

Claire improves, acting with more agency, learning to ask the right questions, and overcoming her initial prejudice against the fae king. By a third of the way through, I had also learned to roll with unanswered questions. I did eventually get answers, but some of them were a long time coming. That was OK, as the gist of the story was about Claire making sense of this strange world she’s been thrown into, and understanding the full import of the breathtaking gamble the king has made. If we’re not a bit disoriented, too, how can we appreciate the mental leaps she has to make?

The story was not entirely successful. In particular, Claire’s relationship with her family was unsatisfying. I wish that plot thread had either been given more attention or dropped. Concern over the deprivations she was suffering from being unable to eat or drink anything in the world of the fae kept pulling me out of the story, too. In Chapter 4 she’s about to collapse from dehydration, but then trudges on for hours (days?) more. (Magical sustenance? Yeah, sure.)

Despite those quibbles, it was a satisfying adventure. Perhaps I liked it as much as I did because I kept seeing parallels with my own novel, The Locksmith: Something valuable is hidden so well its existence is forgotten. A magical entity may or may not be sentient. Magic is shaped by imagination and willpower. Powerful wishes take on a life of their own. Men in peril are rescued by women.

And finally, I learned that if I’m ever pulled into the world of the fae, I should bring along a butter knife…

Audience: Teens and up. Some pain and violence (there is, after all, a war on) but no sex or bad language.

This entry was posted in Epic Fantasy, Fantasy, Noblebright Fantasy. Bookmark the permalink.