Children of the Black Sun 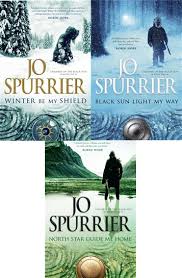 What choices can you make when there are no acceptable choices left? That seems to be the question raised in Australian author Jo Spurrier’s Children of the Black Sun trilogy.

This is one of the best fantasies I have read in years, and deserves a wider audience outside of Australia than it seems to have gotten, but it is not for the faint-hearted. Engrossing? Yes. Gory? That, too. Dark and gritty? Absolutely.

Once protected by powerful mages, the Ricalani people abandoned magic a century ago, making them ripe for plunder. In a three-way war, the Ricalanis are struggling against cultural obliteration as they are slowly overwhelmed by the conquering Mesentrian’s encroaching settlers, or are carried off as slaves to the neighbouring Ashkarian empire.

The main characters are all, in one way or another, badly damaged, both physically and emotionally. There is Sierra, a natural mage, who draws power from the sensations, both pleasure and pain, of others. Isidro, a fugitive nobleman, was a warrior until the villains of the story crippled him, a cruelty compounded by the unforgiving landscape that gives the inhabitants no resources to spare for unproductive adults. And finally there is Rasten, both abuser and abused, awaiting his opportunity to turn on his master, the king’s chief torturer.

I can’t, in a few paragraphs, do justice to the plot, but in a nutshell, it was about underdogs standing up for themselves and the people they cared about. What else was it about? Pain and endurance. Revenge, forgiveness, and redemption. Betrayal and trust. Teamwork, leadership, and brotherly love. Sadism and compassion. Oh, and did I mention pain?

One of the aspects of this story I liked is the nuanced view of the parties in the conflict. There is one unredeemable villain but most are somewhere on the spectrum, neither entirely good nor evil. They are simply human beings, on all sides, all caught in brutalising circumstances that leave them few options. Actions that might seem despicable are sometimes, in context, rational.

Spurrier has done a superb job of world-building. Her writing abounds with sensory details, from the crunch of snow underfoot to the smell of freshly cut spruce, that make her subarctic world believable. You can almost feel the cold creeping into your bones as the protagonists skulk through the woods in their winter whites.

And then there are the women: Sierra, Delphine, Mirasada, Nirveli, and other minor characters, all terrific.

There are three books in this series: Winter Be My Shield, Black Sun Light My Way, and North Star Guide Me Home. (Love those titles!) But don’t be fooled by the packaging; this is one long story (~1300 pages of it) in three volumes. The first book ends in a cliffhanger, and there is only a partial resolution at the end of the second. If I had realised that before I started, I might not have read the first book then, but a hundred pages in, I was committed. I had to find out how it turned out.

It is fair to say they are not consistently page turners. I read them in fits and starts, at some points flying through the pages and staying up too late reading; at other times I got bogged down in the political manoeuvrings or repetitious misery. There were several times when I had as much as I could stand of the agonies these poor people suffered, and I set the book aside for a week or three until I could face them again. I started Winter Be My Shield in September, and finished North Star Guide Me Home in December—not quite four months. Even though I put them aside a few times, I kept coming back because I couldn’t get this story out of my head.