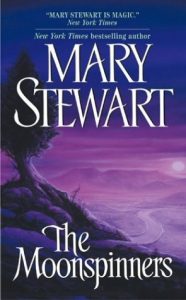 Nicola Ferris, a young Englishwoman on holiday from her job at the British embassy in Athens, goes for a walk in the White Mountains of Crete, and stumbles onto a badly wounded young Englishman, Mark Langley, and his Greek guide. Mark’s injury? He had been shot and left for dead. The two men are badly frightened and worried, revealing in a hurried conversation they don’t expect Nicola to understand, because it’s in Greek, that a third member of their party, Mark’s younger brother, is missing, possibly dead.

This is the start of The Moonspinners, one of my favourites of Mary Stewart’s  romantic suspense novels. Published in 1962, it is set in then-contemporary Greece. Disney released a movie version in 1964, starring Hayley Mills, based loosely on the book. Very loosely. I saw it on TV long after I read the book. I can’t say whether the movie was any good on its own merits—I didn’t like it, because in my opinion it diminished the qualities of the main characters. In the book, they are independent, resourceful people, doing their best under difficult circumstances. Characters, in other words, I can enjoy reading about.

In the book, Nicola’s conscience won’t let her abandon the two men, despite her own fears. The men don’t want another victim caught up in their troubles; they persuade her to leave them and go on with her holiday, unwittingly sending her straight into the proverbial lion’s den. Naturally, she is instrumental in unravelling the mystery of who shot Mark and what happened to his brother.

One of the pleasures of this story is watching the macho hero having to reassess his opinion of Nicola, more than once, after she proves her worth through intelligence, pluck, and determination, without ever getting strident over being dismissed as a girl.

The story is a bit dated, but not badly so. It’s a light, fun read, easily digested over a weekend; just the kind of thing to cheer a person up after a tough work week.