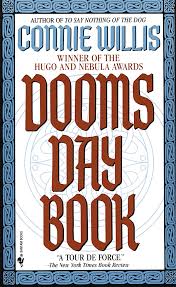 Doomsday Book* is a Hugo- and Nebula-award-winning** time-travel novel by Connie Willis. It was published in the 90’s, but I only stumbled across it a few months ago.

The plot is straightforward: from the near future (December 2054), a young historian (Kivrin Engle) steps back in time, and things immediately go awry. The story-telling skips back and forth between the 14th and 21st centuries as her friends attempt to rescue her, and she slowly comes to realise she is lost in the past. Normal life in both centuries is destroyed by virulent epidemics, and both Kivrin and her would-be rescuers struggle to cope with fragmenting social networks and a terrified populace.

The Sci-Fi time-travel aspect is limited, and quite hand-wavy. The story is really about how people behave in a crisis, with ordinary people doing heroic things, and about responsibility and altruism, despair and hope, faith, and the natures of God and sainthood. And, despite a high body count, it was, in the end, an oddly uplifting story. (Although not without a certain amount of fridge horror. The survivors are going to need treatment for PTSD.)

The 14th-century thread is the more gripping, with characters recognisable as real people caught up in an apocalyptic event, and Kivrin becoming deeply involved in the lives of the people she came to study. The parallel 21st-century thread includes some not very successful comic relief, the supporting characters aren’t well-developed, and the plot devices needed to draw out the rescue attempt were clunky and annoying. Any reader with any sense will figure out what went wrong, although maybe not how, long before the big reveal occurs. This thread takes longer to become interesting, but it ends with a degree of poignancy that took me by surprise.

The book is a bit unusual in that there isn’t a villain. There are a few characters with less than stellar motives, who do irresponsible things, but they are plot devices, not major characters. This is humankind against the forces of nature, events not under our control.

Now for the major flaws:

Despite those flaws and some other minor quibbles, I’m glad to have read it. The story packs a serious emotional punch, the kind that will keep it popping up in my memory long after some more recently-published/recently-read books have been tossed in the giveaway pile.

Audience: Adults and older teens. No sex or violence, but a very high body count, including characters that matter, and a child’s pet.

* Doomsday Book is, of course, also the survey of England ordered by William the Conqueror in the 12th century.

** Although it’s not clear to me why it won either award. The SciFi aspect is the weakest part.