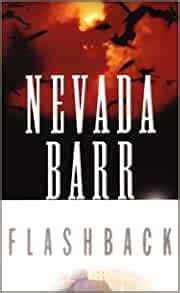 Anna Pigeon is enjoying her temporary assignment as Acting Supervisory Ranger of the Dry Tortugas National Park. The Dry Tortugas, seventy miles further into the Gulf of Mexico than Key West, is one of the U.S. National Park System’s least accessible parks; a perfect place for someone needing time to think over one of life’s big decisions in a low stress, thinly populated environment.

And then, on a hot, calm night, a blast rips through the silence. A boat sinks, taking at least one body with it to rest on the sea floor. A park ranger vanishes. As Anna directs the hunt for the missing ranger and the investigation of the accident, she soon learns that those are just the beginnings of a series of disturbing and deadly incidents.

Explosions, near drownings, body parts, bullets, a brewing tropical storm… These are not a recipe for a low-stress assignment, but they do make for an exciting story. Flashback, by Nevada Barr, gets off to a bit of a slow start, with the first few chapters just exploring the setting and establishing the main characters, but once it cranks into high gear it stays there.

The book contains two intertwined stories, told in alternating chapters. The first one, involving Anna, is a thriller set in the near present-day (2003). The second story, also a mystery/thriller, takes place in the late 1860s, and is told in a series of letters from the fictional wife of the Union Army officer in command of the real Fort Jefferson, the park’s centrepiece. The gimmick tying the two stories together is that the letters have been handed down in Anna’s family from her great-great-aunt, and her sister sends them to her to make her stay in Fort Jefferson more interesting.

The letters build a mystery around a real historical event. Fort Jefferson is massive, the largest brick masonry structure in the Western Hemisphere, containing more than 16,000,000 bricks, and almost completely encloses the island it is built on. It was built in the mid 1800s to protect the shipping lanes to and from the Mississippi River. It stayed in Union hands throughout the war, and after the war it was used as a federal prison. (It would have been even harder to swim away from than Alcatraz.)

Its most famous prisoners were the men convicted of conspiracy to assassinate President Abraham Lincoln. Those prisoners included Dr. Samuel Mudd, who remains a controversial figure, as his role in the conspiracy has never been fully established. The actions in the story told by the letters, including torture and murder, are driven by his attempt to prove his innocence. This second story doesn’t have quite the same momentum as the first, but it is still interesting on its own.

Flashback is the 11th in a series with Anna working in a variety of locations as a law enforcement officer for the National Park Service. This is the second I’ve read, and had no difficulty reading them out of order. Anna is a bit of a quirky character, not entirely likeable, but the depictions of the national parks makes up for her shortcomings. Barr’s writing has a strong sense of place; I feel almost as if I’ve experienced the sand, the heat, and gone diving in the waters of the Dry Tortugas, even though I’ve never been, and probably never will be, close to the Florida Keys.

A couple of minor quibbles: I’m not sure exactly how old Anna is supposed to be, but she must be at least in her mid-forties, if not older. She is described as being a physically active person, but it still strains the imagination a bit when she takes one beating after another over the course of a few days and still manages to kick ass. Short, middle-aged, female action hero? Yeah, right.

Also, the short section where Anna speculates on the nature of the pair of lesbian, possibly trans, lighthouse keepers was squicky, unnecessary, and heavy on stereotyping.

And on a side note: book blurbs frequently seem to have been written by marketing people who have, at best, skimmed the book, if they looked at it at all. The blurb for this one talks about unidentifiable body parts. Um, no. I think I would have preferred if some of the collected body parts had been a little less clearly identified.

Trigger warnings: Violence and gore, lots of it. Drugs. Near drownings. Mention of rape. Claustrophobia-inducing situations.

This entry was posted in Historical Mysteries, Mysteries. Bookmark the permalink.