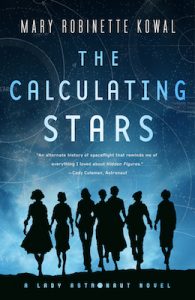 3 March 1952. A large meteorite hits Washington, D.C., wipes out most of the East Coast of the United States, and deals massive economic and emotional shocks to the entire world. The amount of ejecta in the atmosphere also triggers abrupt climate change: first, a years-long winter to be followed by global heating so drastic an extinction event is almost guaranteed. The only way the human race can survive is to get off planet.

In the alternate history/science fiction novel The Calculating Stars by Mary Robinette Kowal, the meteorite strike jump-starts the fledging space program. Former ace World War II WASP (Women Airforce Service Pilots) Elma York itches to be an astronaut, but has obstacles put in her way by the men who don’t want women in the space program. (There’s plenty of racism, too, and the Black WASPs are dealt a double whammy.) Elma eventually wins her spot because not only is she a crack pilot, she’s also a math wiz—one of the female computers doing the behind-the-scenes work before electronic computers were developed.

The Calculating Stars, the 2019 Hugo award winner for Best Novel, is the first book in the Lady Astronaut series. I actually like the third book, The Relentless Moon, better, but more about that in some later post. The series takes us back to the early days of the United States’ space program, with social justice issues at the forefront. We are given a woman’s view of the overlooked computers and non-White/non-male pilots—all people who are given short shrift in books like The Right Stuff.

The book is at its best when focusing on the actual space program: in one particularly memorable sequence Elma has to practice an underwater escape from simulated wreckage in icy conditions, while being required to wear a bikini to keep the attention of the watching press corps. I wish the book had given us more of that (the training, not the bikini) and less of Elma’s personal demons; overcoming the real scientific and technological problems involved would include drama enough. The biggest beef I had with it was that by keeping a narrow focus on the main character’s mental-health issues, it didn’t engage with what could have been a much grander, more epic story.

It also dragged in the middle section, and I could have done without the wince-inducing romantic clinches with Elma’s too-good-to-be-real husband.

Overall, I wanted to like this book more than I actually did, but it’s still not a bad start to a series that improves as it goes on.

This entry was posted in Alternate History, Science Fiction. Bookmark the permalink.