A Wizard’s Guide to Defensive Baking 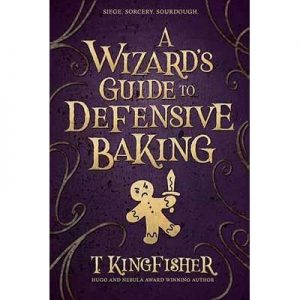 Ironically I am publishing this in the midst of COVID-19, when we all started making sourdough at home and then started protesting police brutality. Suddenly a twelve year old book was actually relevant. Go figure.
― T. Kingfisher

Meet Bob, the omnivorous sourdough starter. Or perhaps you really wouldn’t want to meet Bob; the only person he shows any affection for is Mona, the baker who brought him to life. He’s quite willing to give her globs of himself in return for her regularly feeding him flour and water. But after the time when the city froze over and she couldn’t get to the bakery to feed him for several days, she came back to find his bucket in a different place in the basement and a couple of picked-clean rat skeletons nearby. Since then even she hasn’t been willing to risk annoying him.

Bob is one of several entertaining characters in T. Kingfisher’s A Wizard’s Guild to Defensive Baking, but his is a minor role. Mona is the star. This fourteen-year-old wizard can do amazing things with bread and dough…and nothing else. That’s fine with her. She’s happy working in her Aunt Tabitha’s bakery, using her magic to bake the best sourdough loaves in the city of Riverbraid, and making gingerbread men dance to entertain the customers.

The story opens with Mona arriving one morning at her usual time (4 a.m.) and discovering the dead body of a girl about her own age. A constable is called in, others follow, then the coroner, and finally a man high in the political hierarchy running the city, who promptly charges Mona with murder. That’s obviously ridiculous, but Mona is soon on the run, evading capture with the help of the murdered girl’s streetwise younger brother and a gingerbread man who rides on her shoulder and pats her cheek when she’s upset.

She’s not the only one in trouble. Someone is systematically murdering all the city’s wizards. Before long, Mona is sneaking into the castle to tell the Duchess—Riverbraid’s ruler—news about the city’s condition that her traitorous underlings don’t want her to hear.

In addition, Riverbraid’s army is out in the countryside, following misleading rumours about the location of an army of mercenaries. When the mercenaries arrive at the city gates with the city’s army three days’ march away, the defence depends on the skill of the only two remaining wizards: the madwoman Knackering Molly and Mona, the bread wizard.

What can one fourteen-year-old bread wizard do against an invading army? Quite a lot, it turns out.

Magical talents in this world appear to be both unique to the individual and narrowly defined. Knackering Molly can make dead horses walk. Another wizard, a carpenter, can smooth knots out of pieces of wood. Minor talents, apparently, but the primary limiting factor on what the wizards can do with their talents is the size of their imaginations. I won’t spoil the fun by giving away what Mona does, but I will say the battle for the city was entertaining.

The story is at its best when focusing on Mona’s wizardry. The world building was weak; there were a few things about the city, in particular, that bothered me. (A walled city, riddled with canals? Hmm. And so large it took hours to walk across? Yeah, right. And the bungling incompetence of the people in charge? Well, maybe that’s not so farfetched.) Some of the characters—the urchin sidekick and the formidable aunt among them—felt like clichés, and the villains were tissue-paper thin. On the other hand, several characters—the gingerbread man, Bob, Knackering Molly—were more interesting, and there were some minor characters sketched out in a few lines that left me wanting to know more about them: Mona’s uncle, a scullery maid, and and a problem-solving blacksmith that responded to this teenage girl’s orders with no resentment.

This book is a quick, easy read, suitable for middle grades and up. It is quite funny in places, but there is darkness lurking under the humour. It does, after all, deal with murder, betrayal, and the imminent destruction of the city by rampaging barbarians. Mona starts out as a naive, trusting girl and becomes disillusioned as she is forced to accept adult responsibilities the adults in charge can’t or won’t. The first chapter reads like a murder mystery, but it soon turns into a coming-of-age story, with Mona learning the hard way how painful, both physically and emotionally, being a hero can be.