Posted on 3 January 2021 by Barbara Howe 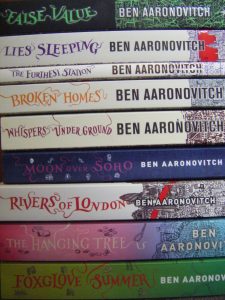 Before the holidays I owned five of the books in Ben Aaronovitch’s Rivers of London/Constable Peter Grant series. I had added the next book to my wishlist, and my family gave me four books in the series (from three separate people). They had not coordinated with each other or checked on which ones I already had, but there were no duplicates among either the old or new ones. How awesome is that? That stack should keep me entertained for a while.

There are several other books I’m particularly looking forward to this year:

And of course there will be new books by New Zealand writers, and lots of books already in my TBR pile by writers like Lois McMaster Bujold, Zen Cho, Anne Perry, Dick Francis, Elizabeth George, W R Gingell, Georgette Heyer…

Somehow, my TBR list only seems to get longer, never shorter. So many books, so little time.