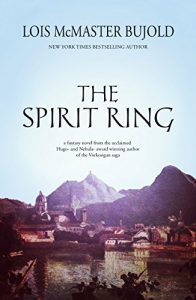 Lois McMaster Bujold’s noblebright fantasy The Spirit Ring, set in Renaissance Italy, opens with a young woman, Fiametta, assisting her father, Prospero Beneforte, master craftsman and mage, in putting the final touches on a magical poison-detecting salt cellar. Their richly decorated creation is intended as a gift from their duke to the duke’s daughter’s husband-to-be, Lord Ferrante. But when the betrothal party goes bad, with their duke murdered and their city of Montefoglio overrun by Ferrante’s men, Fiametta and her father flee. Ferrante’s men track them, murder Master Beneforte, and take his body away to be used in black magic enslaving the powerful mage’s unshriven spirit.

Fiametta, naturally, is horrified. With the assistance of Thur Ochs, a young Swiss metalworker, she returns to Montefoglio determined to free her father’s spirit and see justice done.

On first dipping into The Spirit Ring, I wasn’t thrilled with Fiametta, who seemed like a flighty teenage girl with her mind on romance and an overly generous assessment of her own abilities, but she grew on me as the book progressed. She is a bit naive but brave, and the author shows us that she is talented, as she steps up to accomplish things her older and wiser advisors say can’t be done.

This isn’t a story with great depth, but it is a fun read, with kobolds, ghosts, and asides into mining and metalworking. There is also a gentle romance, but the love-at-first-sight trope is subverted, at least on Fiametta’s side. Thur does fall for her immediately, but when her magic tells her he is her one true love, she is aghast. A big, stupid Swiss lout is not at all what she had in mind. But of course he’s not as much of a lout as he appears.

There are other appealing characters in this story, including an abbott who is competent, caring, and a voice of moral authority, and a maybe mad, maybe not castellan. Even the power-hungry Ferrante is brave and in some ways likeable. Only the evil magician working for him is irredeemable, despite the abbott’s valiant efforts to redeem him.

And finally, when the story is over, you’ll never be able to view Benvenuto Cellini’s bronze statue of Perseus in quite same way, ever again.

Audience: teens and up. Violence, but no sex or bad language.

This entry was posted in Noblebright Fantasy, Uncategorized. Bookmark the permalink.

2 Responses to The Spirit Ring