ConClave3, New Zealand’s 39th National Science Fiction and Fantasy Convention, was held this past weekend in Auckland. I did not, as I had hoped, win a Sir Julius Vogel award for either Best New Talent or Best Youth Novel (for The Locksmith), but simply being a finalist was a good thing, and losing to Gareth Ward is a respectable outcome. I’m a third of the way through his The Traitor and the Thief and quite enjoying it.

I came back loaded with enough suggestions for interesting authors and books to read that exploring them all will probably keep me busy until next year’s convention, GeyserCon in Rotorua. Along with all the others already on my To Be Read pile, I’m unlikely to ever run out of new books to read.

We indulged ourselves a little on Monday and did something we’d been talking about doing ever since we moved to Wellington: we took the train (the Northern Explorer) home from Auckland. It made for a long day, not helped by the delays introduced by work crews taking advantage of the reduced traffic on the long Easter weekend to make repairs on the rail lines, but it was a pleasant, relaxing way to travel. The weather was good, giving us many panoramic views, including this nice one of Mt Ruapehu. 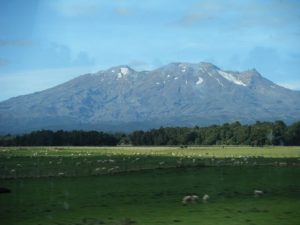