Posted on 1 September 2017 by Barbara Howe 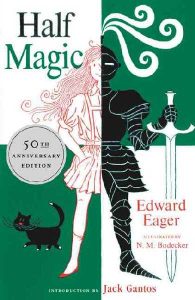 The captivating children’s books by American author Edward Eager are among the classics in children’s literature. I remember being spellbound by them when I was first introduced as a young reader, and my then seven-year-old daughter enjoyed them when I read them to her.

The seven books are, in order, Half Magic, Knight’s Castle, Magic by the Lake, The Time Garden, Magic or Not?, The Well-Wishers, and Seven-Day Magic. Not really a series, there are overlapping characters, and it’s best, but not necessary, to start with Half Magic.

As fantasies, these might count as forerunners to the modern urban fantasy genre, being grounded in the real city of Toledo, Ohio. There are no paranormal creatures; the magic comes into play from a coin found on the sidewalk, or from a book borrowed from the library. Some of the stories are set in the 1950’s, when Eager was writing, but Half Magic and Magic by the Lake are set in the 1920’s, when he was a teen, and abound with period detail, from Model-T Fords to the songs played by the orchestra at a dance pavilion.

I’m sure you’re all familiar with one of my favourite tropes: Be careful what you wish for. The theme of needing to think through the consequences before you speak or act runs throughout the set of books, but is most evident in Half Magic, where the coin the children find grants only half a wish, and they endure painful mistakes before learning how to phrase their wishes to get what they want. I enjoyed this problem-solving aspect of the books as a child—maybe related to the fact that I grew up to be a programmer—and as a parent, have an even better appreciation of the lessons so gently imparted here.

The illustrations by N M Bodecker are delightful, and humour and wordplay add to the charm. In Magic by the Lake, four siblings spend the summer in a lakeside cabin with a nameplate by the door saying Magic by the Lake. When one of the girls says,

These books aren’t without faults. There are a small number of scenes of cartoon violence that might disturb the more literal-minded young readers, and the 1950’s attitudes towards race and sex, though mild for the time, make me wince. Use them as opportunities for discussions on how attitudes change, and you should be fine. The faults aren’t serious enough to avoid these stories over, because these books are gateways to more serious reading. Eager invites his readers in to a richer, wider literary world through frequent references to other books and authors his characters are familiar with, and if that leads other children to the tales of King Arthur, or Little Women, or E Nesbitt, or any of dozens of others, then that’s surely a good thing.

Audience: Anyone. Contains a very small amount of cartoon violence.